Study suggests skateboarders offer a valuable life lesson for us all 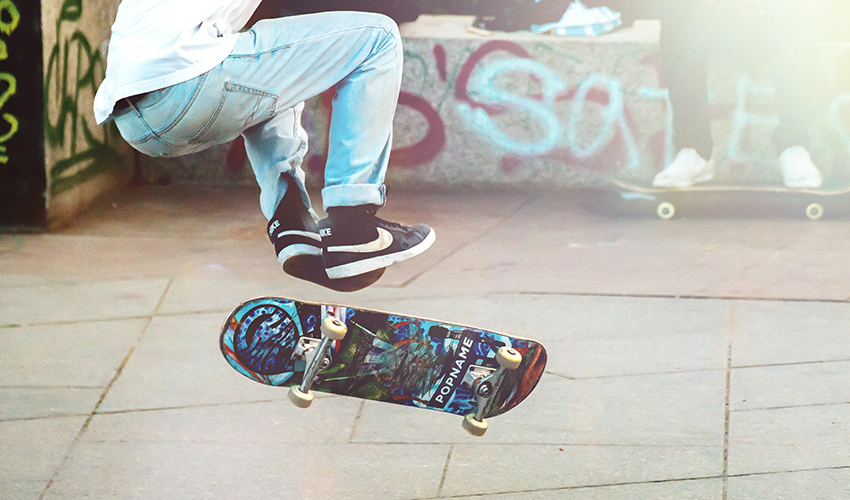 San Francisco State University Lecturer of Sport and Exercise Psychology Michael Boyd believes everyone can learn a valuable life lesson from a particular group of extreme athletes: skateboarders. Research by Boyd suggests that to find motivation in life, you need to focus on learning new things and taking a little risk.

“I was inspired to do this research when I noticed a kid was trying to do this skateboard trick but kept failing. The kid said something along the lines of, ‘I’ve been working on this trick for more than a year, but I’m going to keep trying.’”

Published in the Journal of Sport Behavior, Boyd’s paper is one of few studies that looks at the psychology of skateboarders. The objective? To determine, among a sample of skateboarders, if goal orientation — or the types of goals a person defines as success — and physical risk-tasking were associated with intrinsic motivation, which is engaging in behavior because it’s personally rewarding.

“I was inspired to do this research when I noticed a kid was trying to do this skateboard trick but kept failing,” said Boyd. “The kid said something along the lines of, ‘I’ve been working on this trick for more than a year, but I’m going to keep trying.’ That’s the essence of this study.”

Boyd interviewed about 150 skateboarders between ages 18 and 32 at skate parks in San Francisco. The skateboarders were first surveyed to measure their appetite for physical risk-tasking. For Boyd, risk means trying new tricks in a safe way to improve skills; not recklessly performing potentially dangerous feats that are clearly beyond a skateboarder’s abilities.

Scholars then surveyed skateboarders to determine whether they gravitate more toward task orientation or ego orientation. Athletes exhibiting task orientation feel successful when they learn a new skill through effort and practice, while those demonstrating ego orientation define success as performing better than other people, Boyd explains.

Lastly, Boyd surveyed respondents to measure their intrinsic motivation for skateboarding by presenting them with reasons a person would participate in an extreme sport. One example: “I participate in my extreme sport, because I enjoy doing something to the best of my ability.” Respondents then ranked how much they identified with each reason.

The data gathered proved Boyd’s hypothesis correct: Skateboarders who demonstrated high levels of task orientation and willingness to take risks also showed higher levels of intrinsic motivation. Essentially, skateboarders who focused on accomplishing new tricks and taking reasonable risks are the ones motivated to participate in the sport because they find it personally rewarding.

That was not the case for skateboarders who scored high for ego motivation. They exhibited lower levels of intrinsic motivation. This suggests that comparing your performance to other people isn’t conducive to being motivated, Boyd says. That serves as a life lesson for everyone, he adds.

“In life, work on your own improvement, forget about comparing yourself to others and take a little risk,” he said. “If you do that, you’ll be motivated.”

For safety reasons, San Francisco State has a no-skateboarding policy on campus. Once on campus, skateboarders are asked to carry their boards